Covid-19: beyond the epidemiological aspect, there is a social aspect. On September 26, on #Lancet, one of the most prestigious and reliable scientific journals, there was a discussion about a part often overlooked in the various analyzes on Covid-19 (https://doi.org/10.1016/S0140-6736(20)32000 -6): is it really a pandemic? We usually take it for granted, but it could be a syndemic (a word unknown to most) in reality. Syndemic is defined by Merril Singer in the 1990s, "A syndemic or synergistic epidemic is the aggregation of two or more concurrent or sequential epidemics or disease clusters in a population with biological interactions, which exacerbate the prognosis and burden of disease."

Covid-19 could be just that. It rarely kills on its own; it does so more often in conjunction with other diseases, ailments, and in any case, overt or hidden health problems. Most of these secondary diseases are, in large part, related to people's social status. Horton, in the #Lancet discussion, adds: "The syndemic nature of the threat we face means that a more nuanced approach is needed if we are to protect the health of our communities. [...] a syndemic approach reveals biological and social interactions that are important for prognosis, treatment, and health policy."

Covid-19 is not just a viral disease; it is the litmus test of social diseases. Italy leaves no one behind, whether you are no-mask or no-vax, health care is public and will treat you, regardless of class. Let's not forget it…. 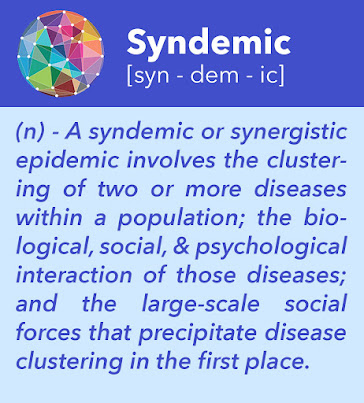 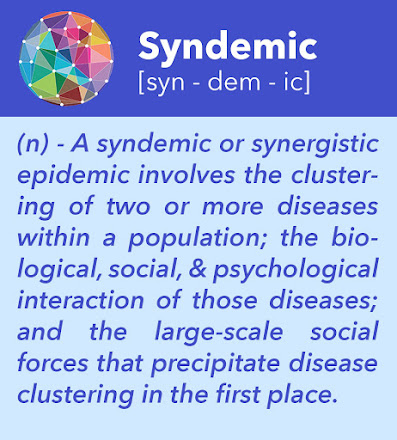 Keep calm and wear the mask 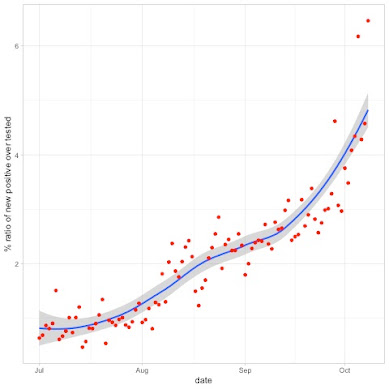 These days, we witness reasonably substantial growth in the number of cases of COVID-19 (and in the positive rate) throughout Italy. Some regions are definitely on alert (Campania); others are only on alert (Lazio, Sardinia, Liguria, for example).

However, this situation must be distinguished from what happened in March-April, when there was, as now, more than 3000 daily positives.

In the most dramatic days, the policy of tampons was very different. We only had tampons for the symptomatic, often severe, and we could not look for the asymptomatic. Today it is very different, practically everyone gets tampons, and we add, fortunately. We have gone from 30,000 tampons at the end of March to about 130,000 today. We have been monitoring the positivity rate for weeks now, which is the ratio between posts and the number of people tested. Today we are at 6.5%, definitely up. This allows us to understand how much COVID-19 is present in the population, always remembering that, fortunately, asymptomatics are about 90% of positive test cases. A large number of swabs, an effective screening policy allow us to protect the most fragile and prevent intensive care clogging's catastrophic effect.

How can we contribute, by doing our part, to avoid the spread without control of the epidemic? Here too, it is not complicated; there are a few very simple points:

1. Wearing masks and often washing our hands 2. Avoiding gatherings and keeping distance if there are many of us 3. Isolating those who are positive even if asymptomatic 4. Often airing the rooms where we spend time, from the office to the classroom, the workshop, the bedroom, etc.

In Italy, a great help can come from the use of the app #Immuni !

We wonder if it is indispensable to use the bugbear of a new lockdown, feeding uncertainties and fears in the population. The goal must be to raise awareness and inform people. Frightening them doesn't help them understand what needs to be done. The country is still doing well. Everyone (or almost everyone) is rowing on the same side. The health system is strengthening and providing quick and effective responses. So just be careful and follow the few rules, those of common sense, that we have given ourselves and, in part, have imposed on us. Then there is the economy, and yes, that is at least as scary as the epidemic. We cannot afford a new generalized closure; it is evident, we must be aware of it. And then just put the mask (correctly). The situation is serious, but it takes very little to remain open and competitive. 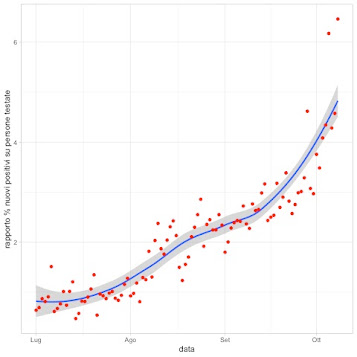 Evolution of a WHO indicator: the cumulative incidence rate at 14 days 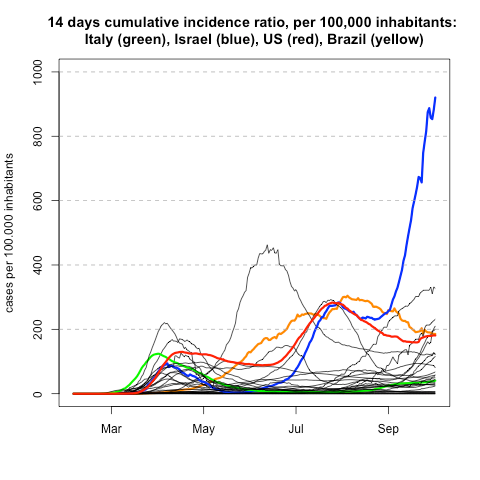 The 14-day incidence rate per 100,000 inhabitants is the official indicator through which  WHO evaluates the speed of the spread of the Covid-19 epidemic in the various countries of the world.
In general, the incidence is the number of new cases observed. It can be daily, monthly, etc. In this case, W.H.O. considers the new cases observed in the last two weeks and expresses them per 100,000 inhabitants, thus removing the population size effect. Being represented in units of time (14 days), this ratio is called "rate," as it describes the variation in the number of new cases as time varies.
The graph shows this speed indicator's trend from the beginning of the epidemic to today for 30 countries: when the indicator grows, the epidemic accelerates. When it decreases, the epidemic slows down.
At the moment, the ranking of these 30 countries is as follows. 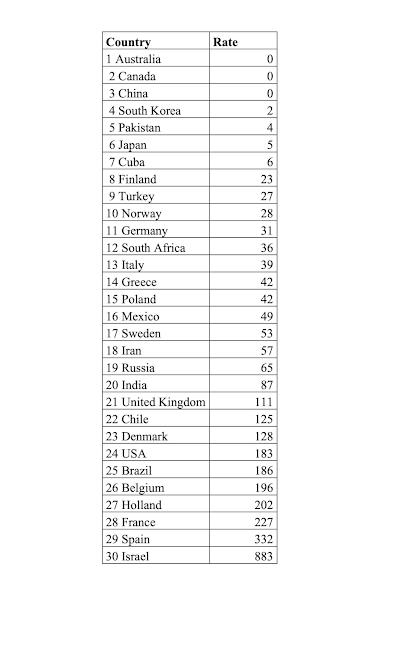 Italy occupies the 13th position with 39 new cases every two weeks per 100,000 inhabitants. The worst situation is that of Israel, with the speed indicator equal to 883.
---
NB: the zeros in the ranking are approximations of decimal values 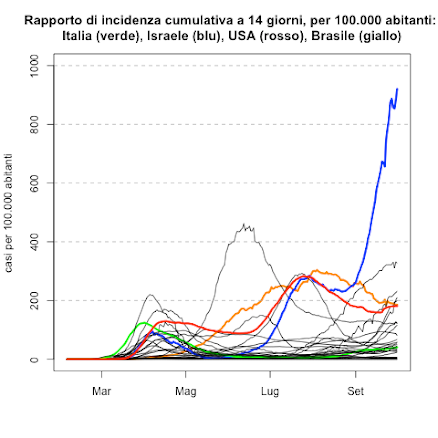 Comunicating science during the pandemic 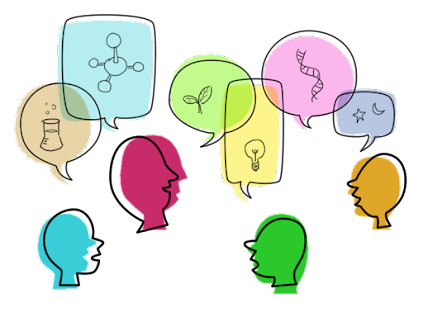 Every time we write a post about Covid-19, there is a question that invariably guides us: "How do we explain the epidemic so that even without technical education, people can be aware of what is happening?". Indeed, there is much more behind this question. There is the relationship between scientific communication, often technical and cold, and mass communication, driven by feelings and fears. Scientific journals are the place to communicate science. Impactful scientific work,  a study that shakes the scientific community, has a high degree of reliability and, generally, requires a lot of time, a lot of work, and a lot of data.

Newspapers, blogs, social networks, on the other hand, are the main places to communicate with the mass (the mass media). Obviously, the mass media cannot wait for the times of science. Mass communication is "fast" and, at times, driven by the desire for the "scoop," the sensational. In a normal situation, the two ways of communicating don't often integrate.

This epidemic has brought the two worlds closer together: the scientific scoop's sensational and research have pervaded scientific journals. Scientific research's solidity and rationality have made its way into communicators who had never dealt with science. However, this is not necessarily a good thing.

Many high-profile scientific journals have stolen the way of communicating from the mass media. They give ample space to "intellectual exercises" on COVID (in "who has the longest model" style), based on uncertain hypotheses,  on very few data and models approximate. Science, not the Daily Unknown, is full of them. In another era, scientific journals would have rejected all these intellectual exercises as inconsistent without batting an eye. At a time like this, giving space to poorly constructed studies without clear premises on the validity of the data and methods is an irresponsible act. The exploitation of these works is around the corner. We must be aware of it. The mass media do not have the skills to judge whether one research is valid or not. Somehow, they trust scientific communication, even if they do not always fully understand it. A communication distortion was, therefore, created.

From this distortion, a new mission is born, which is ours, but also of many other scientists (see the end of the post): to communicate concepts, models, results, which simultaneously have the same scientific solidity of well-done research and the typical immediacy of the phenomena that shake the masses. Communicating science through mass media is not trivial. Excellent examples are (some in Italian and some in English):

all blogs that take the space and time to explain things well.

Scientific communication on social media is still a very young and inconsistent creature; it does not have a well-defined identity. We are trying to give it one, starting with warning against the "ad hoc" manipulative sensationalism and elaborations that sometimes come together (see Sweden's case, a failure and not a panacea).

Let's not forget the responsibility that all of us communicators (of science and the masses) have. Better a little less media visibility and good research than an approximation and the search for the scoop to impress, sometimes upset (terrify) the masses. We reiterate that we do not cheer for science. We are not sellers of opinions, "science is not democratic"; it is competence, and this is what must be valued and defended.